What were they thinking?

You can never truly know, of course, what your characters thought, nor–in most cases–what they said. But, if you carefully study documents they saved and read history books about when they lived and read newspapers that they very likely read (which, as I mention on the Archives & Libraries page, you can get via inter-library loan), I think you can make some pretty good guesses. And you’re lucky: the internet makes it even easier to follow the clues.

My example is a little complicated, but please bear with me because it shows how you can substantiate a hunch–and sometimes have your “substantiation” confirmed. Picture this: it’s the winter of 1865/66. John’s been looking for a steady job since August. He lives in Buffalo,NY, where the best he can get is one-day gigs when an extra engineer is needed. His father sends a letter in February 1866 that says, in part, “If the[y ]had all stood firm there would have been an end of Bosses.” It seemed to me that John must have sent his father a letter about some sort of a strike.

A couple of months later, my sister Barbara sent me a box containing family letters from 1930 through 1965. Salted in with these much more recent documents were a few that pertained to John, including a BLE “Notice to the Traveling Public” (shown above), which absolutely confirmed my previous deductions.

This “notice” was justified because Master Mechanic James Sedgley had black-listed all the striking engineers and firemen, then replaced them with men whose qualifications are extremely dubious. One of the unqualified replacements was Sedgley’s wife’s half brother! (Don’t forget that you can click on this image to enlarge it so that you can read the text.) What made this even more interesting (to me anyway) is that Sedgley later turns up in two other documents that John saved. A sharp eye for pattern recognition makes the game much more interesting.

The New York Times digitized their archives and made them available on-line.  A few years ago, I was able to find many relevant references at no charge. Early this year, to mark the sesquicentennial of the Civil War, the Times launched Disunion. Too late to help with my research, it’s fascinating to follow nonetheless. The link will take you to Christian Wolmar’s Sept. 7 post, The Iron Horse at War. Wolmar is a noted British railroad authority who, in his latest book, writes about the  brilliant railroad engineer Herman Haupt, who–of course–figures prominently in my book, too. 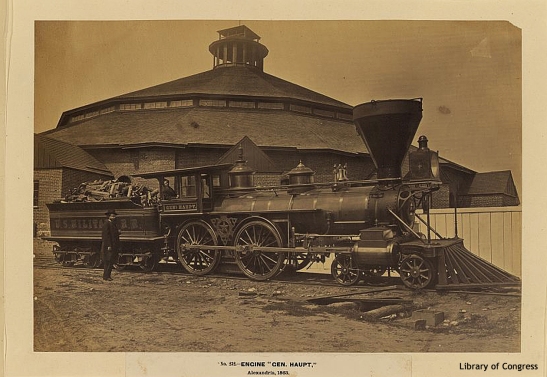 And you can find, download, and use thousands of images–like this one– from the Library of Congress to evoke the era of your story.

I found a number of arcane–but extremely useful–volumes like the First Annual Report of the Commissioner of Railroads of the State of Michigan for the Year Ending December 31, 1872 and Troublous Times in Canada, A History of the Fenian Raids of 1866 and 1870 on Google Books. For some reason, they are no longer  in my “Library.”  And it seems that Troublous Times in Canada is now under the imprimatur of Cornell University Press.

Enter the phrase that you are curious about and see what you find. Follow the threads and keep fishing!