A sense of place and time

Although your characters lived in generations past, there are many national parks and museums–of various kinds–where you can find the past preserved and get closer to them. John, my engineer, grew up in Toronto in the 1850s, became a locomotive engineer during the US Civil War, and was an “engine driver” for the rest of his life. Here are some of the places where I felt a special connection. 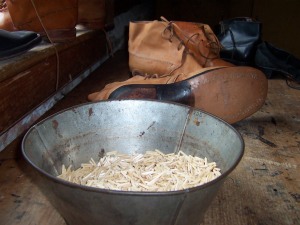 We found Upper Canada Village on the shore of the St. Laurence Seaway, where forty heritage buildings from the 1860s were brought for preservation when the Seaway was constructed during the 1950s. You can wander about and talk to costumed interpreters who explain the occupations they represent and, of course, answer questions. The “school marm” welcomed visitors by saying, “Boys to the left, girls to the right!” In the General Store, we learned what a “hem protector” is. And the shoemaker explained how they assembled leather boots using wooden pegs, which would swell when they got wet and stay in place. Iron nails would rust and fall out. Also, the boots were “un-lasted”: the right and left boots were the same until they were broken in and took on the shape of their owner’s feet.

John lived in Jackson, MI for the last 25 years of his too-short life. At the Ella Sharp Museum in Jackson we saw what life was like on the outskirts of town from 1857-1912. We stayed at the lovely Rose Trellis B&B, a restored Victorian Gothic home  where we luxuriated in period atmosphere not far from where my characters lived and worked. 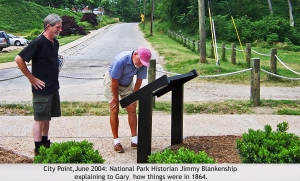 When we learned that John had gone from Alexandria, VA to General Grant’s Headquarters at City Point with his train on a boat, we went there. We became acquainted with Jimmie Blankenship, Park Historian at Petersburg National Battlefield, who’s working on a history of the US Military Railroad. In 2004, he  showed us around and explained how the railroad encampment was down by the riverbank, while the Army camp was high on the bluff.

A couple of years later, in the Gift Shop of the Rice Museum in Georgetown, SC, completely by chance–we discovered this tinted print that had appeared in Frank Leslie’s Illustrated Journal on Oct. 1, 1864, a week before John arrived with his fireman, engine, and tender on a steam ferry. This is what he saw.

John drove American Standard locomotives, also called 4-4-0s because of their wheel configurations. Fortunately, quite a few still exist at places like the Railroad Museum of Pennsylvania in Strasburg, PA. And I just discovered that American Rails lists rail museums all across the country.

John dreamed of going to work on the Transcontinental Railroad. I imagine he felt at least a twinge of regret when he read on May 11, 1869, that in Promontory Summit, Utah, the day before “At noon local time, the Utah telegraph operator signaled with three dots that the silver sledge hammer had driven home the Golden Spike. Simultaneously, bells pealed over the US Capitol Building in Washington D.C. as cannon roared over San Francisco’s Golden Gate.” We went to Golden Spike National Historic Site to see where it happened, and thought of John as we watched the replica of the gorgeous 4-4-0 Jupiter steam over from the round-house. Yes, the original engine was painted the same way. 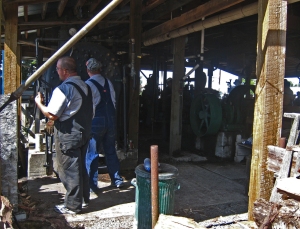 There’s a Big Steam-Up every year at Antique Powerland, near Salem, OR.    We saw  steam-driven tractors from John’s era–along with dozens of applications of steam power from the 19th century. I especially liked this steam engine (firebox, boiler, and cylinders) , which was salvaged from a wrecked locomotive and hooked up to a complex system of pulleys to run a large sawmill operation. It was a powerful reminder of human ingenuity at a time when the railroad was the hi-tech industry.

When I saw this display in the California State Railroad Museum in Sacramento,  I felt as though the mannequin  was John himself, checking out his engine before a run–even though the clothes are not quite right.